I'm wondering if anyone can relate?

Are there others like me?  Others, who just followed the rules and got burned? Others, who have sat on the sidelines and watched as other vaccine injured children have reclaimed their lives with drugs, therapy or supplement intervention?

I have spent years and years trying to fix it...you know, that mistake I made out of ignorance. Years and years of attempting an array of things to help her....only to have door after door slammed in my face.

And now, suddenly, a couple new doors are opening. 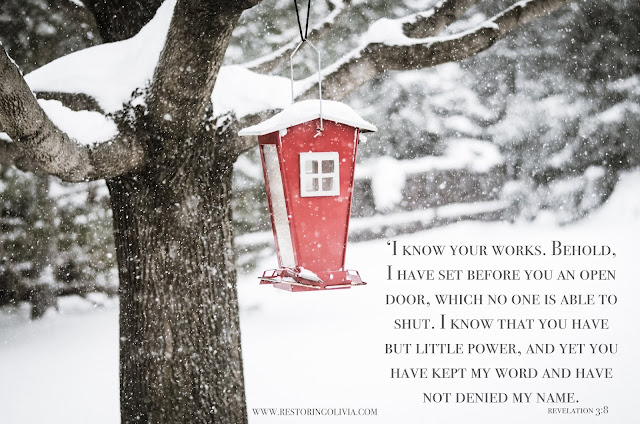 I absolutely love this scripture. To add some context, it comes from John's letter to the Church of Philadelphia, one of the seven churches in the province of Asia that he writes to about a vision he received from Christ.

Incredible words from an incredible time. Words that I can take hold of for myself, for Olivia. Words that are living for me and my situation today.

How much more can I ask?

Right now, with Olivia, it's subtle things. Subtle differences that have taken root over the last several months. To the average person there's no hint of anything big taking place. All in all, she still appears the same. She still has seizures (although not as many and not as hard), she is still a bit weak and not able to walk on her own (but can walk up the stairs to take a bath on most days). We are almost back to her baseline before the last hospitalization. Whew! That was a lot of work - but so worth it!

I don't know.....its just a feeling, like a change in the atmosphere of our situation. Hard to quantify but that feeling of daily dread has lifted. We are on a new road now and although the appearance of what's to come is "a cloud as small as a man's fist" (I Kings 18:44), I know the rain of blessings is coming. I can feel it.

I apologize for the lack of updates. Olivia's care has been more demanding and I am in the process of cleaning out my in-laws house. Unfortunately, they both passed away within months of each other . It's a difficult thing to sort through the remnants of two lives.....seeing the material things we collect along the way as just that..... material things that stay back and linger in the basement.

Even with all the hardships with Olivia over that last almost two decades, I feel I can still stand strong and recognize the goodness of God in my life. Yes, He allowed this devastation, but "allowed" is the main point. I CHOSE to trust and believe in a manmade system of health care. I was blind and ignorant to the choice I made - I did zero research on the dangers of vaccines and the damage that can and does inflict SO many children. Haunting U.S. statistics:

The takeaway for us is that He sustained her instead of taking her. He protected her body and brain from all the pharmaceutical medications --- especially from all the potent medications she was given in the hospital in early 2018. Remember....they said she would never be able to hold her head up again. Their "New Normal" prognosis can't stand up to the power of God's provision.

I was reminded of this gorgeous song last week. Bethel Music!❤️❤️❤️❤️

Lyric nuggets from this song that speak to me:

For Your mercy never failed me
All my days, I've been held in Your hands 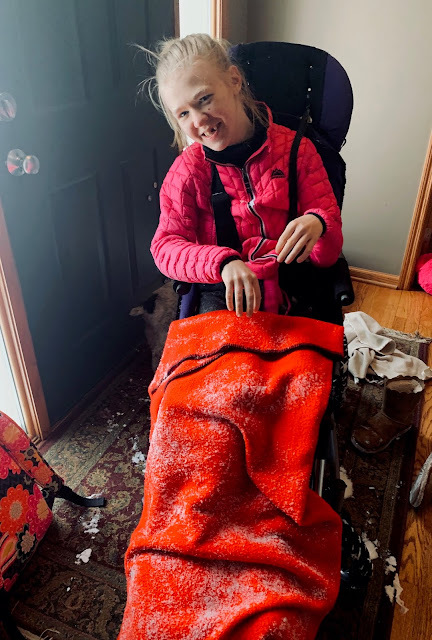 Olivia the "snow bird" getting off the bus. The amount of snow we've had is crazy!! I choose to believe that for Olivia and I this is the beginning of our SHOWER of BLESSINGS!!! It's just in frozen form right now!

Posted by Restoring olivia at 11:51 AM