Side Effects Can Be Brutal

Our address has temporarily changed. Personally, I haven't missed the St. Paul Children's neighborhood from the last sleepover, but we had to check in. Don't get me wrong --- I've appreciated St. Paul Children's the few times I've had to camp overnight since switching to their beautiful Neuroscience floor, I just don't like the reason for having to relocate there. No one would. Olivia has been struggling for about a month now ---- sick one week, a little better the next, but then she began to spiral down until there was no other option than to take a ride North.

Prior to this bump in the road, she had almost three seizure free weeks. Now that is heaven!

But seriously, the issue at hand is the side effects from the medication she was on (and still on) prior to starting the Medical Cannabis. Here is the frustrating part - even though this medication (Keppra) has never been a star performer in the seizure arena for Olivia, we were somewhat coerced to keep her on it because it made others feel good. 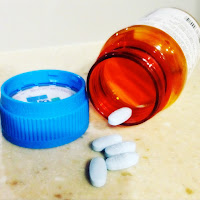 It's no secret that Keppra side effects can be brutal, just ask any parent who has had a negative encounter with it. Olivia's a case in point. We were first introduced to it when she was 9. She broke her femur during a seizure and the stress of that break sent her into a tailspin. The first month seemed fine, but then we started noticing things that just weren't her --- the aggressiveness, holding her urine for 15 hours - oh and I can't forget her walking around hitting her arms and legs with her fists and stomping her feet -- all day long. It wasn't until we were in month 5 and she was having hour long rage sessions every single day and she would sit down and hit her self for hours on end, that this drug became a huge problem......Rage......painful urination.....pins and needles in extremities......those pesky little side effects that are in the fine print, holding my beauty hostage as she likely felt as though she was losing her mind.  Did I mention she was still having seizures? Two months of weaning and the unwelcomed behaviors faded away as the drug left her system.

Fast forward to 2014----Her seizures again are somewhat out of control (sadly I've seen worse). Our only option according to the hospital staff during discharge - Keppra. Wait a second!! What about the side effects I just explained in depth to vacant eyes and wandering minds? Standing in that room with 5 experts in white coats with what seems to be in their opinion no other option. Do they think I made up the side effects when she was on it at nine? Apparently so.....the pressure was too intense and I caved and put her on it. It reminds me of a clip in the kid's movie "Matilda". Harry Wormwood showing his dominance over his daughter Matilda  I felt like these doctor's were saying to me: "Listen, you little wiseacre: I'm smart, you're dumb; I'm big, you're little; I'm right, you're wrong, and there's nothing you can do about it."

This is just a reality in the uncontrolled seizure medication world. A negative reaction to a drug generally means (or should mean) that it cannot be tolerated ---- ever. But the retrying......recycling....looking for a better outcome is always attempted, and most often fails (in my experience anyway). I can now look back and see that her terrible year from late 2014-2015 was further compromised by this medication. The side effects may display differently but the writing was always on the wall. In her weakened state she no longer had the fight in her to be aggressive, instead the weakness, the nausea, the inability to walk overtook her. At this average dose for her age/weight it just created general malaise (in addition to the effects above) but thinking about taking her off or trying to switch to another drug (with odds it would also not work) was daunting.

But then, in walks Medicinal Cannabis and recovery started to look possible. Within weeks of introducing it she started walking again, even at a sub-therapeutic dose. As the months go by on the Keppra, she begins catching more infections, causing bad weeks and continued struggles and gosh darn it I fall for it again. The insecurity creeps in, the fear takes hold and I agree to increase this drug despite my gut screaming at me to stop the madness.....to get another opinion.....but instead I force myself to believe these experts ---lie to myself that it would work positively with the Cannabis. The Cannabis is a miracle for her, but its unreasonable to assume that the Cannabis can stop side effects caused by a medication. Regrettably, history repeats itself.

Why do I do it? Why do I consistently cave in to pressure when I know in my heart it is not good?Why do some prescribing doctors believe that side effects do not happen? Logic is stifled when solutions only involve introducing another drug instead of taking away the offending one. Logic screams truth in that the only way to get rid of the side effects is to get rid of the drug. Olivia's individual history has shown that the first month or so on any of the medications we have tried seems promising, only to find out 4 or 5 months later that it is not tolerated. My mommy instinct knew this several months ago, but the worldly confusion spoke otherwise. Why in the world would a mother fighting for a better life for her daughter make something like this up? I would do anything for a medicine to work --- it just has never been in the cards for Olivia.

Yesterday, the Neurologist I met with spoke so much truth. He reminded me that if three separate AED drugs are tried and there is no measurable control of the seizures the odds of finding one that works is next to nil.

So, here we are, 5 months after the increase and the side effects are front and center and she needs to come off. Weaning seizure medications is never easy. Oh my heart. It's going to be a long couple months and I would so appreciate your prayers.

Here's a video taken in April when she was doing really well. Practicing sitting in real chairs, not her wheel chair.

I am faithfully trying to "run with perseverance the race God has marked out for us". Hebrews 12:1
Even when these hurdles are thrown my way....some much taller than my petite little legs, I trust that God is going before me. Fighting for His loves and creating a path for His will for Olivia's life.

Thank You So Much For The Prayers - I will keep you updated.